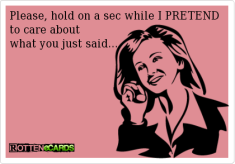 I recently called the doctor’s office and was greeted by a receptionist who seemed less than enthusiastic about helping me. She rattled off her barely comprehensible, customary greeting, which ended with “How can I help you”, but hardly sounded like she wanted to help. Before I could complete my request, she abruptly interrupted me to

tell me that “the person who handles that isn’t here until Tuesday, m’am”. That would not be for another four days. Really? I thought.

Dumbfounded and utterly dismayed by this potential impasse, my mind constructed an image of this woman-girl on the other end of the phone, who offered absolutely no additional insight. I imagined her filing her nails (or twirling one end of her hair as she examined them, if by chance she was wearing a headset), head fully cocked to one side, squeezing the receiver between it and her shoulder, eyes rolling at the top of her head, as she mentally filed me under “Not My Problem” and counted the minutes until she would be rid of me.

“What did you say your name was?” I asked.

“Oh, I see. Is there any one else in the office that might be able to help me…Toi?”

“Sure”, I replied, prepping myself for what might be a while. Meanwhile, I seethed on the inside. Toi’s indifference made me skeptical about whether she was being truthful. Nonetheless, I was prepared to wait.

Admittedly, I am rather intolerant of the glowing lack of critical thinking or problem solving that seems to characterize “customer service” today, but I have become more patient as I’ve grown older. Not long before now, I would go off when the likes of Miss Toi missed what I thought was the mark. I felt that many like her not only lacked the professionalism and courtesy that I came to expect from a front-line person or gatekeeper, but that they seemed bothered by any requests that required thinking or doing more than just entering my name into an appointment calendar.

Today however, I became remarkably aware of the silence – the hold to which Toi subjected me; it was as if Spirit was giving me an opportunity to recalibrate my response, to be more empathetic even. Rather than warm up for the moment when she’d return to the phone and give her a piece of my mind, this eternal hold allowed me to step back and figure out how I could reframe my attitude to not only get what I wanted, but communicate to Toi that it wasn’t about me, per se, or even her, but that it was important that everyone who called the doctor’s office be treated with a certain level of professionalism and courtesy.

“Acknowledge her”, said the Universe.

“Call her by name, then acknowledge her”, Universe repeated.

Still on hold. This recalibration exercise was taking longer than I thought.

What else could I do as I remained on hold? Surely, I could have tidied my surroundings a bit. Better yet, I could just be still while letting that patience thing take hold so I could more diplomatically manage the dialogue between Toi and me when and if she returned.

After about three minutes and no hold music, a woman returned to the phone. She didn’t sound like Toi. What happened to Toi, I wondered; I’m ready to practice this patience thing.

“This is Pam, the office manager, how can I help you?”

Great! That is who I needed to talk to in the first place, although…”the person who handles that isn’t here until…Tuesday”. Had the weekend come and gone while I was on hold? There was no upside in throwing Toi under the bus at this point.

The lesson was for me, and not Toi…but what was it?

16 thoughts on “Hold That Thought”

My Tweets
Follow Life As An Art Form on WordPress.com

Life As An Art Form in Pictures: